ROSTEX VYŠKOV s.r.o., a Czech manufacturing company with a more than 90-year tradition 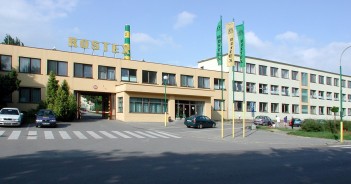 In the time of its existence the ROSTEX brand has achieved a significant position on the domestic market, mostly thanks to its original technical solutions, its timeless designs, and its selection of the highest quality materials during production.

The philosophy of ROSTEX VYŠKOV s.r.o. is to offer the customer a product with high utility value.

Our main competitive advantages are:

The origin of ROSTEX stretches back to the year 1925, when its small-scale operations were founded in the small Southern Moravian town of Vyškov under the name Železářský průmysl with a focus on the production of small metal goods.

The new ROSTEX trademark, which protected this type of door hardware, became a known entity among contractors until modern times. In the course of subsequent years the company underwent a number of organizational changes. We recall at least its inclusion in the national company SANDRIK at the beginning of the 50s.

In the year 1969 for its symbolic character the traditional ROSTEX trademark became the name of the company itself. As part of privatization in the year 1992 the state company was transferred to a private company.

The current program with its assortment has expanded into several fields: